Mr HART (Burleigh—LNP) (11.10 pm): I rise tonight to bring to the attention of the House an issue on the southern Gold Coast that needs urgent attention, and that is the M1. From the Mudgeeraba flood plain to the start of the Tugun bypass the M1 is four lanes. It is six lanes up to the Mudgeeraba interchange, but it needs to be six lanes all the way down to the Tugun bypass. Last Friday I joined with the member for Currumbin, and we stood on the side of the road and we talked about the issues down there. We watched the traffic and we talked to the media about the issues of the banking up of traffic. Members from the other side who are not from the Gold Coast—and there are not too many of them from the Gold Coast; in fact, none of them are from the Gold Coast because we are all LNP members on the Gold Coast, and that is the way it should be. Members on the Gold Coast know that there is a real issue down there and we have been trying to do something about it for quite a while.

What I would like to know from the minister—and I am glad to see the minister is in the chamber here tonight—is what has been done about getting six lanes from the Mudgeeraba flood plain down to the border. The government has put in place a quango that is in charge of projects above $100 million. I know for a fact that the next stage of the M1 is over $250 million, so I would anticipate that the business case for the continuation of the M1 right down to the Tugun bypass has been referred to that quango, and I hope that the minister can tell us that that is in fact the case.

Mr Bailey: Talk to Malcolm Turnbull and get him to stump up some money.

Mr HART: I am glad you brought that up, Minister, because last Sunday I had the opportunity to talk to the new Prime Minister, along with the member for Mudgeeraba, and that is exactly what we spoke to him about. What he told us was that he has not seen a business case from the Queensland government yet. He has not seen a business case yet for this very important piece of infrastructure on the southern Gold Coast. The Labor government has been in place now for seven or eight months. Why haven’t we seen a business case? Has the business case been referred to your Building Queensland, or whatever it is called—the new quango that you have put in place? Has it been referred there? What is the minister doing about it? 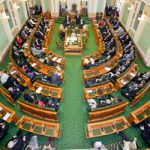